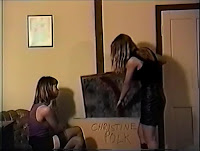 In a grotty apartment, a woman dresses in sexy undies. The same woman starts to remove sexy undies for a customer. Another woman, in a completely different location, dances on a table. The first woman takes a shower. I think I can see a theme here! A box is delivered. First woman lets her towel fall. Back to the second woman dancing on a table, this time with a fat man watching. First woman gets dressed again. There's definately a theme here! Well, that's well over half the film gone and all I've seen is a box and someone getting dressed and undressed a few times. More table dancing. Another woman enters the apartment. Now, either woman two is wearing a wig or this is woman three... I'm pretty sure this is woman two. They discuss the box, open it and pull out a painting. At last! They then move another painting to a different position, discuss which way to hang the new painting and at long last hang the fucking thing. Five minutes to go. Woman one leaves the apartment to take over the job of dancing but this time not on a table but on a very small stage. Woman two (remember, she's in the apartment) is strangely drawn towards the painting... well she stares blankly at it and gets up off the sofa. The painting bulges towards her hand in a cheap Videodrome, hand poking from the other-side sort of way. A rubber dick pops out of a gash in the painting which then grows, grabs the woman around the neck and pulls her into the painting! The painting burps. Two minutes to go. Woman one is now dancing behind a parasol while stripping. The film then just ends. I'm sure something must have been cut at the end but it was probably more dancing, dressing or undressing.

If you think that because of the multiple dressing/undressing and table dancing, that this is a sexy little short, you couldn't be more wrong. It's not. At all. Nope.

If you really want to watch it you can find it here.