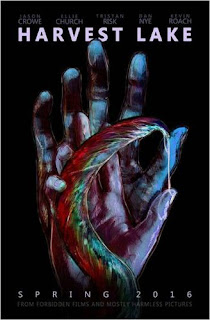 Four friends getting back to nature, fall down an acid drenched rabbit hole and in the process lose their inhibitions in a frenzy of fungi-fucking.

As in music, a sophomore film is always going to be tough. Viewer expectations will always want to reference the first film and this is generally how directors end up in a rut; churning out rehashes of what the audience liked about their first successful film. Director Scott Schirmer firmly kicks these expectations into touch and then stomps all over them. Harvest Lake is not Found.

I don't think I've ever seen a film quite like Harvest Lake. Although the basic premise is very simple, calling it high-concept is most inappropriate. This is horror as art and I guess the closest film in feel and tone would be Jonathan Glazer's Under the Skin. The feelings engendered by the film are so subtle that we could ask ourselves, is this really horror? While the film does explore certain fears; nature, loss of control, sex, gender, it is, like all good horror films, only horrific based on what we bring to the film. It gently strokes our anxieties rather than sticking a knife in our guts. As the friends start to lose control, merging with nature, they revert to what we all are underneath the artifice that society cloaks us in - animals fucking in a forest, and to some that's pretty scary.

The stunning rural location and atmospheric sound design give a naturalistic feel; tranquillity during one moment, unease in the next. Light and shade. The fungi themselves are well designed and subtly remind us of sexual organs: an oozing penis, lactating breasts, some gently throbbing labia. The forest creature itself feels like it's always been there, since the dawn of time. An ancient being, waiting to bring us home, to be the creatures that we once were. These are effective and elegant effects that enhance without overpowering the film's simplicity.

The static camera-work with macro, wide-shots and slow pans are perfectly suited to the tone and environment. It was a real pleasure to watch a low-budget film without any damned "shaky-cam". It must have been tempting to throw a shit load of filters onto the camera during the trippy sequences but cinematographer Brian Williams avoids this cliché and instead lets the landscape and the camera do the talking.

The performances are wonderfully uninhibited. Personal and sexual boundaries are set in the first 15 minutes and then gradually discarded throughout the rest of the film. While, for me, Ellie Church, Tristan Risk and Jason Crowe were the stand-outs, the whole cast work really well together and look like they had a real blast filming. These aren't your average, young American teens that you want to see killed at the first opportunity - I like these characters! The film is well scripted with naturalistic dialogue and some light touches of humour.

Although the influence of Glazer, Cronenberg, Invasion of the Bodysnatchers and even a little Brothers Grimm can be seen, Harvest Lake is very much its own film and high praise should go to the cast and crew for creating a unique and beautiful experience.

Harvest Lake is an unnerving and quietly scary sexual-fairytale. Support independent film-makers and order a copy. At the moment the initial limited edition run of 250 Blu-Rays (I'm in the credits!) has sold out but a non-limited edition will be available for pre-order on March 11th 2016 (ships March 15th).


Letterboxd Review
Posted by Andrew Liverod at 22:00 No comments: 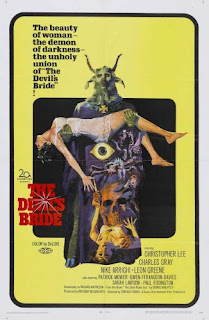 A simple tale of witchcraft, faith and the triumph of good over evil.

This review is for the new Studio Canal Blu-Ray; a restoration taken from new a 4K scan of the original negative (note that the actual release is a 2K downscale). The original aspect ratio of 1.66:1 is kept and the film is very slightly pillar-boxed with narrow black bands at the side of the screen. The picture itself is wonderful and I can't imagine there being a better release of this late-sixties, Hammer classic. So far so good, but what about the controversial digital enhancements to the original optical effects? Well, I'll leave you in suspense until the end of the review.

The Devil Rides Out is possibly the first horror film I ever saw as a child, although due to the haze of time this honour may go to an equally loved film, Jacques Tourneur's Night of the Demon (1957). At the time that the film conjured an almost palpable sense of dread and terror that made quite the impression on a young boy, aged still in single figures. As a result I've owned The Devil Rides Out in various formats over the years from dodgy "recorded from TV" bootleg tapes, to legit VHS and DVD and now a Blu-Ray. Is it still as good? Well, after seeing the original cinema 'X' certification ident at the beginning of the film, I was hoping so.

The story could come off as risible and overblown, but is treated with with absolutely seriousness and gravitas by all concerned. By all accounts Christopher Lee really did believe that witchcraft was a dangerous subject that could imperil your sanity and soul. The film latches onto the late sixties fascination with the occult and mysticism and goes to great lengths to portray magic with an accuracy that cannot but aid believability and sustains suspension-of-disbelief throughout the film.

The Devil Rides Out relies, in equal parts, in both the horror of the imagination and some more physical manifestations of evil. Along the path to salvation our heroes must face a djinn, a giant spider, Baphomet, and even the Angel of Death itself.

That the film does not rely on blood and gore (of which there is none) but instead  builds a totally believable world filled with a real sense of dread and impending doom is a testament to the care and attention of the cast and crew. Set in the late twenties the setting could come over as a little old fashioned and privileged with every speaking part (apart from two butlers) being either stinking rich or members of the aristocracy but at least it sticks to its guns and rarely makes a mistake in set or dressing - one notable error is the 1960s haircut and rather repulsive and flammable dresses belonging to Richard Eaton's wife. There is none of the farcical, tongue-in-cheek campness that infected British horror of the period.

Directed by Terence Fisher (The Curse of Frankenstein, Dracula) with his usual colourful gothic style, The Devil Rides Out oozes the "good versus evil" duality in his Christian background and, during one scene, even goes so far as to have Mocata equate Satanism with science. The compositions are quite beautiful and the use of colour even more so.

The screenplay by horror legend Richard Matheson (I Am Legend, The Twilight Zone) roars along like Lee's 1927 Bentley barely pausing for breath; there is always something on screen to hold your attention.

Lee plays de Richleau perfectly, perhaps calling on his own aristocratic roots. He is authoritative, commanding and strong, used to people doing his will. What Mocata obtains through mesmerism and cunning, Lee achieves with will and a belief in the social hierarchy present in Britain at the time. A favourite 'Lee' scene of mine is when, towards the beginning of the film, Tanith mentions "Surely we're not meant to be more than 13"; the sharp look that Lee gives her is wonderful!

Charles Gray plays the mesmeric, seductive and quietly menacing Mocata. A villain very much in the mould of Karswell from Tourneur's Night of the Demon but without the childlike petulance. Sort of like a cross between an insurance salesman and Derren Brown.

I know he gets a lot of stick but I think Leon Greene (with Patrick Allen's voice!) is great as de Richleau's friend Rex and the film's resident blundering oaf; forever sticking his foot in his mouth and creating danger wherever he goes. His disbelief in magic is as much to do with stupidity and lack of imagination as it is rationalism.Sure he can be as wooden as a post but I sort of like his blank faced charm. He plays us, the audience, the doubters who need persuading that dark forces really do exist.

Joining Lee and Greene in our triumvirate of heroes is Paul Eddington (The Good Life; Yes Minister) as Richard "Nice but Dim" Eaton the husband of her of the hideous dresses.

A young Patrick Mower (Cry of the Banshee, Callan) is suitably wet-behind-the-ears as the naive Satanist neophyte Simon and is joined by Niké Arrighi as a beautiful and slightly odd and unhinged Tanith. Together they make a great pair of damsels-in-distress, needing constant vigilance to make sure they don't go wondering off back to Mocata or strangling someone in their sleep.

Finally, I must mention a brief appearance by Gwen Ffrangcon Davies as a Countess with the weirdest, most fucked up eyes ever to grace the screen.

Now, on to the effects enhancements. During the making of The Devil Rides Out the budget given to effects wizard Michael Staiver-Hutchins was cut, ensuring that the majority of the major set-piece effects were unfinished or reduced in scale. Having watched this film well over ten times in the past few decades I can state that I never really cared that much as the atmosphere carried me past all the shonky genies and wobbly observatories. Having said that, I was really impressed with the lightness of touch used in updating the old optical effects. This wasn't a case of George Lucas stomping all over Star Wars in his size 12 "Industrial Light & Magic" boots. These, apart from a replaced lightening strike, are subtle enhancements that complement rather than obscure. Well done Cineimage!

I have not listened to the commentary as yet.

The "making of" short documentary was extremely interesting and explained how having Black Magic rituals in the film was important as at the time the UK censors regularly cut them from films (i.e. Masque of the Red Death) and the country still had blasphemy laws (and, unbelievably, still do). Also featured is mention of the late 1960s occult revival and an interview with a very old and infirm Richard Matheson. A couple of interesting facts: Patrick Mower, who plays Simon, is 6' tall but looks short because the rest of the male cast were even taller. The horse playing the Angel of Death's mount was wheezy and only had one lung!

Finally, for some strange reason the "World of Hammer" extra has something wrong with its audio (at least for me). Oliver Reed's voice-over pretty much disappeared apart from a deep rumble. This makes me think that they'd stuck it on the wrong channel - the subwoofer! In an attempt to fix this I turned off my 5.1 system and just used the TV sound. Oliver Reed was back, although still very, very badly mixed and almost lost against any of the clip soundtracks. I gave up.

"The Goat of Mendes, the Devil himself!"

"I shall not be back... but something will"

Posted by Andrew Liverod at 21:30 No comments: