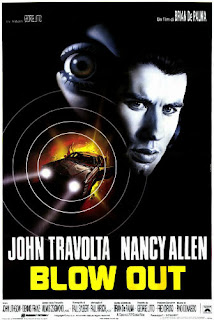 A sound-recordist accidentally captures the killing of a US presidential candidate on tape.

I haven't seen Blow Out since the 80's and bought Arrow's release to pack out an order so that I got free shipping. I really couldn't remember much about it and wasn't expecting much from a re-watch. Well, that'll teach me to be presumptuous!

Blow Up is De Palma's ode to giallo and specifically the films of Italian maestro of the macabre Dario Argento. De Palma's trademark style (over substance according to some) fits hand-in-glove with giallo. We have De Palma's usual red and blue neon reflected off of rain covered streets, but this time they have a distinctly Argento feel to them. Then there's the killer POV shot, the dreamlike night-time scene with an owl and a frog, the non-police investigator (a sound recordist), the use of architecture and glass, several moronic police officers who will not listen to the investigator, the gloved killer, even J&B Whisky makes an appearance. Even the relationship between sex and death is covered with the orgasmic killing at the end of the film.

But, I hear you say, where the knife? The knife rather neatly bookends the movie in the film-within-a-film. This allows De Palma to include one of the most notable giallo devices without being tied down to a well worn cliché - remember this is post-Halloween 1981.

There are a couple of issues. Firstly a couple of the sequences are overly long and badly needed trimming; this would have tightened up the whole pace of the film. For example, the Nancy Allen and Dennis Franz near-rape scene could have done with several minutes being sliced out. Secondly, some of the music choices were pretty bad. Not Last House on the Left bad, but poor none the less.

Nancy Allen is wonderful as the young and naive honey-trap, Travolta capitalises on his good looks without coming over as smug and handles his role well, and John Lithgow plays weird and deadly so well!

And that end! Travolta's character using a woman's dying scream in the slasher film-within-a-film really is something Argento would have come up with.

Letterboxd Review
Posted by Andrew Liverod at 21:00 No comments: 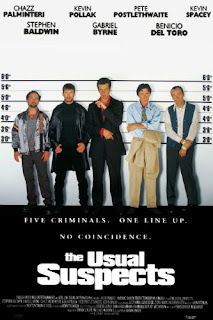 WARNING: The following review will contain a major spoiler for the few fools left that have not seen The Usual Suspects.

A serendipitous evening of film! I first re-watch The Usual Suspects (a homage to film-noir) and then decide to watch Blow Out (a homage to giallo) without meaning to place them together at all. Spooky!

For some reason The Usual Suspects didn't stand out as film-noir the first time I watched it, but on this viewing it hit me like a lead-filled sap to the back of the neck. The shadows contrasting with occasional bright sunshine, a convoluted plot, revenge, wonderful camera angles (downward, upward and over shoulder), an edit to a downward shot of a cup of coffee, deep focus shots, the story told in flashbacks with a voice-over by an unreliable narrator. There was only one thing missing... a femme fatale.

Here comes the spoiler... are we ready?... last chance... Verbal Kint is the femme fatale; he starts off as fragile, vulnerable but ends up duplicitous and devious. Much like Barbara Stanwyck's character in Double Indemnity, Kint manipulates situations and people until he gets what he wants. And the big reveal? Just one of the most iconic shots in modern cinema.

The performances are excellent with Spacey being the obvious stand-out, but not forgetting Benicio del Toro's comedic turn as Fenster. Stephen Baldwin is Stephen Baldwin again.

The Usual Suspects has great screenplay and photography by Christopher McQuarrie and Newton Thomas Sigel, respectively, but what the hell happened to Bryan Singer's career after such a promising start?

Unlike the "twist-in-the-tail" movies by M. Night Shyamalan, The Usual Suspects is a film that doesn't rely on the single twist at the end to supply satisfaction, and it's worth watching several times to try and pick out the clues that lead to the lame man walking.

Letterboxd Review
Posted by Andrew Liverod at 19:00 No comments: 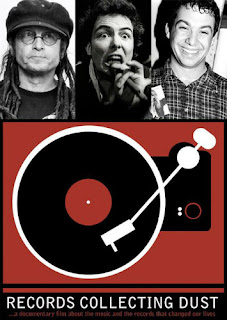 The doc's digs through the record collections of some of the greats of punk, hardcore and metal and asks about the sounds they grew up listening to, the records that influenced them and the stores they bought them in. For just under an hour we get to listen to some musical heroes of mine including:


There are a couple of issues though. The first is that, due to copyright and expense, we don't get to hear any of the records chosen. Secondly, the doc contains three promo clips of artists featured in the film. There doesn't seem to be any reason for this apart from shameless self-promotion, and leading the pack is, rather obviously, Jello Biafra with a clip of his latest band that lasts 2:35. Considering his sound-bite contributions total 3:53 in a film of just 53 minutes (excluding title and credits) I can't help come to the conclusion that Jello is still a bit of a dick. Personally I would have preferred it of they'd left him out no matter how much of a DK fan I am.

The doc is interesting, doesn't outstay its welcome and it's always a treat to listen to Keith Morris and Mike Watt - I could quite happily hear them waffle on all day.

The whole film reminded me of a store that I used to buy from when I was a kid. There was a crazy golf course beside a beach that, for some odd reason, had an attached record shop. The floor was always covered in sand, the record sleeves had a coating of sea-salt and my mate's brother (who once threw a dart into my forehead) lived out the back in a shed. Ah, those were the days.

Anyway, it's a cool documentary which should have had some cool music in it and it features a dickhead. Oh, and my god, Chuck Dukowski looks old!

To fit in with the doc, here's my first music purchases: 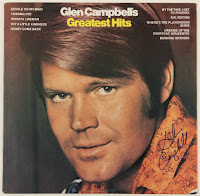 First music ever bought: Glen Campbell's Greatest Hits on tape, probably sometime in '77. It was the only thing I could afford locally and I'd never even heard of him before. I still love Wichita Lineman. That year my gran also bought me a David Soul cassette because I liked Starsky & Hutch! Before this I did what every kid did - taped Top of the Pops on a portable cassette recorder.

First LP: Star Wars by The Sonic All-Stars, in '78. Again, all I could afford. Bought from Woolworths. 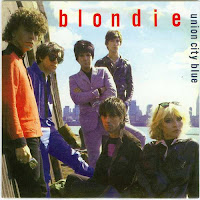 First 7" singles: The Sex Pistols - The Great Rock 'n' Roll Swindle / Blondie - Union City Blue. Both with my birthday money in '79. These were the records that, for me, really started it all, even though the Sex Pistols' single is terrible and most people would never even consider it a true Pistols record.


Letterboxd Review
Posted by Andrew Liverod at 20:45 No comments: