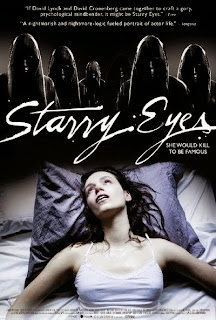 Starry Eyes starts with an examination of our unhealthy obsession with fame, celebrity, stardom and the darkness, filth and corruption that sits just beneath the thinly veneered gloss of Hollywood. How far will we go for validation and acceptance?

I loved the first half of the film but the second falls into its own pool of decomposing body-horror silliness, full of obvious metaphor and none of the subtlety of the first 40 minutes, but I guess they needed to pull the punters in somehow.

I think I would have preferred Starry Eyes if it was a 40's black & white film staring Bette Davis with (and this is the possibly only time you'll hear this from me) none of the gore! 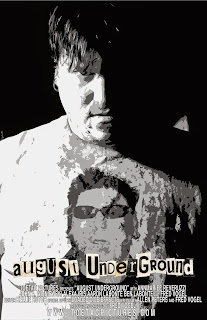 I know I've been absent for a few weeks but my wife has had another Multiple Sclerosis relapse and is due to go back into hospital for another course of treatment - it's the same chemotherapy as they give leukaemia patients. Plus I've had to do a load of construction/carpentry work on my daughters bedroom and other assorted shit. Anyway, I thought I should at least try to get back into the swing of things and what better than the light-hearted August Underground to get started...

Five minutes in and I'm wondering how the hell Fred Vogel can maintain this for a whole 70 minutes.

Grim, nasty, horrific, punishing. The film acts as a counterpoint to the trivialisation of torture and abasement portrayed in the media and popular 15 cert Hollywood "horror" movies. Serial killers are nasty evil fuckers and not one-liner snapping media whores. Serial killers don't eat fava beans and don't drink fucking Chianti. Vogel gives us a killer that we most definitely wouldn't want our kids dressing up as come Halloween.

The low-res video, the over-saturisation, and the grounding in the mundane gives August Underground a terrible realism that's hard to ignore and harder still to watch. This is Henry: Portrait of a Serial Killer turned up to eleven and is a stunning, if appalling, début feature. 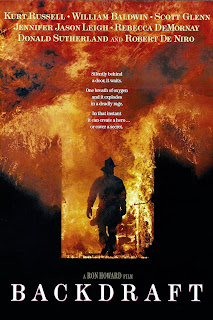 According to Ron Howard firefighters are uber-macho arseholes that belong to some weird circle jerk of a boys club and, if they were on fire, I wouldn't waste piss on.

The real star of this film is fire which really does seem to live and breathe; the rest of the cast can burn as far as I'm concerned.

My daughter wants to be a firefighter (one of the real ones that I truly admire) and I'm going to do my best to make sure she never watches this shitty film.

I couldn't finish this re-watch.

Original letterboxd review
Posted by Andrew Liverod at 21:30 No comments: 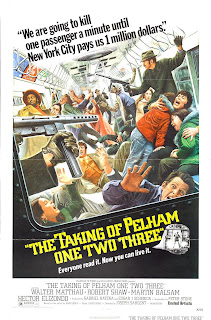 The Taking of Pelham One Two Three has immaculate and speedy characterisation; in the first 7 minutes we know everything we need to about each of the hijackers without one of them speaking a word. The cast? You'll be busy going "hey, isn't that..." as this film has some of the greatest character actors around, and Steve, you're right about the soundtrack... sparsely used but Shire brings in some stonking horns and wild percussion when needed!

You may have noticed I've used the term "character" a couple of times? That's because that's what this film has: character. Something the glossy and forgettable Tony Scott remake was sadly lacking. Perfectly paced and chock full of character, grit and killer dialogue, The Taking of Pelham One Two Three is about as 70's New York as you can get.

Bonus points for getting that reference without Googling.