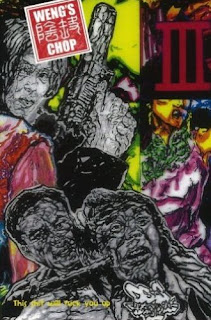 I grew up with zines. I remember the old punk zines, I was a Hawkfan and had some of the Hawkwind zines, then the hardcore punk zines - back when I ran a punk distro I even had an advert in some of them. In other words I love them. For some reason though, film zines just passed me by. Sure I read Fangoria, Darkside and even Samhain, but all those handmade, handwritten horror manifestos went straight under my radar. Then I noticed some of my Amazon recommendations were books with names like Cinema Sewer and Weng's Chop and that they had volume and issue numbers! It seems that zines are alive and well in the age of the internet and, as I'd just received a Christmas bonus, I thought I'd check them out and ordered the full back catalogue of both Cinema Sewer and Weng's Chop.

The first issue of Weng's Chop is a wee zine. It's a 52 page, small format book filled with B&W print and illustrations, and comes wrapped in a full colour, perfect bound, soft cover. The zine covers exploitation, horror, adult, gonzo, trash and the weird side of film. For those worried about illegible handwritten text and cut and paste layout, do not fear. Although the print is small it's cleanly layed-out and completely readable. Sure it has the occasional spelling and grammatical error but so fucking what. It's full of the same passion and energy of the zines of yore.

The reviews are informative, funny and not snobby or elitist in the least. The authors really know their stuff and each has their own area of expertise. The frequent cast, crew and film references will give you hours of fun searching on IMDb and Amazon, although your bank balance may regret it.

Weng's Chop is from people that understand grindhouse, exploitation and underground films and get that it's not the end of the world if an acting performance doesn't hit the mark in some low budget indie gore-fest. They get that. That's not to say that it's full of fanboy gushing as they're not afraid to lay into any fuckups, but, as they say, it's all about the context.

The standouts are:
Totally recommended.
Posted by Andrew Liverod at 11:06 No comments: