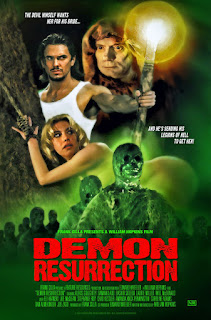 A young ex-cult member gives birth to a demon, whilst all around her zombies threaten the lives of her friends.

Demon Resurrection was shot on digital but has a real SOV feel to it. Maybe it's down to the 4:3 aspect ratio, but you could really imagine this being shot in the 80's. Where a lot of low-budget underground horror films take the easy route of cheesiness to counter any claims that the film is silly, Demon Resurrection has the balls to take itself seriously. There are no crappy jokes, no over-the-top performances, no gross-out scenes for the sake of it. Instead writer/director William Hopkins takes several elements from other films to create a decent and believable plot, builds atmosphere, and gives us a nice pay-off at the end. This is a film that wears it's influences on it's sleeve, from the one building location of Night of the Living Dead, the impregnation and subsequent birth of Rosemary's Baby, to the feel of Hammer's "Witchcraft" films The Devil Rides Out and To the Devil a Daughter. The influences don't stop there, there's also the cosmic horror of Lovecraft and even a Cthulhu-like beast makes an appearance, admittedly in book form, but it all adds depth.

Sure the film looks amateur but the director has a real feel for film making and there are some really nice shot choices. Occasionally you can tell that he was limited by lenses when he has trouble framing several subjects in an interior shot, but really, who gives a shit. The editing is nice as well, I have no idea if more than one camera was used but it really feels like there were several just like in a more expensively shot movie. The performances are well above the standard of usual low-budget films and no-one stands out as being particularly crappy. The sound can get a little muffled and fuzzy in places but otherwise it's nice and clean. The soundtrack is subtle, unobtrusive and adds to the creepy enclosed atmosphere. The video effects were minimal and well used; pretty much all the special effects were practical with CGI being limited to a green fuzz that surrounds the zombies and a couple of other scenes.

On to the blood and guts. The zombie creatures were really quite good. Sure you can tell they were wearing rubber masks and but they had a sort of endearing Rawhead Rex feel to them. I loved them! The blood was standard corn syrup and the guts were either good latex or pig innards. We've got some typical disembowelling (a windowpane evisceration was a stand-out), a broken zombie arm piercing a neck, the demon baby birthing scene (reminiscent of Alien), some boob chewing, and something you don't see in many films... someone pissing their pants. There are a couple of naked scenes but these are handled well and don't come over as softcore porn shoehorned in to sell DVDs.

You can buy it straight from the director here