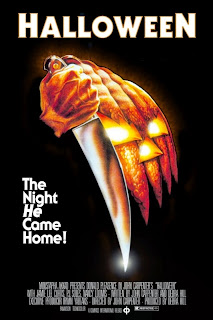 Starting with one of the most iconic opening sequences in horror cinema, Carpenter effectively builds the tension steadily to a pulse-racing climax. After decades of horror abuse Halloween is one of the few films that can actually do this to me and the reason is that the progression is so slow and steady that you don't notice, until, at the end, you realise that your heart is beating faster than it should; and believe me, that's a huge thing for me.

I do disagree with Donald Pleasence's Loomis though. Michael Myers is not evil. He is a primal force of nature. He just is; he always has been and always will be. He is what we see in the dark shadows of night and in the flames of a fire. If Halloween was shown to our primitive ancestors they would be just as terrified as we are now.

One of the greatest horror films ever created from a master at his peak.