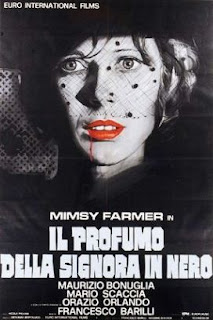 I watched the Raro Video DVD in Italian with English subs, and oh joy, the DVD is one of those "I'm going to vibrate your DVD player until you go fucking crazy" discs!

So, are we ready to head down the rabbit hole? There may be a few small spoilers on the way.

Influenced by the first two films in Polanski's Apartment Trilogy (Repulsion [1966], Rosemary's Baby [1968]), the occult films of the late 1960s (Night of the Eagle sprigs to mind), a touch of Gaslight [1940/1944] and the psychology hidden behind Alice's Adventures in Wonderland, The Perfume of the Lady in Black is a gialli that plays with the standard elements of the genre to give us a hallucinatory psychodrama instead of a slasher flick. Yes it has certain well-known giallo motifs: light/shadow, architecture, mental collapse, hallucinations, the macabre, sex/violence, mirrors and glass, spiral staircases, and of course J&B Whiskey; but don't go expecting a black gloved killer and an ending that wraps everything up in a nice neat package.

Mimsy Farmer plays Silvia, a chemist who begins to see visions of her dead mother and flashbacks to her life as a child, her mother's suicide, abandonment by her father and abuse by her mother's lover. Slowly her world starts to crumble but is it her memories or a bizarre conspiracy that causes her breakdown.

Yes, The Perfume of the Lady in Black does borrows liberally from Rosemary's Baby but this is very much it's own film and to suggest otherwise does it a great disservice. The theme of witchcraft and the paranormal is introduced subtly and from various sources: the wind rustling through the trees whilst Silvia looks at her mother's grave, the black cat, small incidental conversations witchcraft, the clairvoyant, a thunderstorm. We get the idea that something supernatural is involved but it's never actually stated as such. The same goes for the conspiracy; friends and family act a little oddly, strangers glance knowingly, coincidences abound, but nothing is too obvious. In fact we start to feel as paranoid as Silvia.

Throughout the film we have the idea of dreams as reality. A cat seen in a vision later appears in real life, likewise with a vase and this is where my earlier reference to Alice's Adventures in Wonderland comes in. At one point in the film Sylvia, in effect, grows smaller as she conjures a vision of herself as a child who then accompanies her throughout the last third of the film. Even the Mad Hatter's tea party makes a horrific appearance. Just like Alice, Sylvia builds her own world from the crumbling bricks of her psyche and in this world everything is a little skewed and off centre.

Childhood is another major theme throughout and Farmer portrays Sylvia as innocent and childlike, from her waif-like appearance (Rosemary's Baby again) to the toys (small doll, model theatre, Mickey Mouse clock, the Alice in Wonderland book) she still keeps from her childhood. During a game of tennis, she pricks her hand on a nail (a fairytale needle or thorn if ever there was one) and her boyfriend's business partner "kisses it better". There is even the proverbial "monster under the bed" in the shape of her mother's lover. This all leads slowly towards the inevitable corruption of childhood and her final break from reality. We know her mental collapse is complete when, in a taxidermist's, she writes her childhood address down in a hesitant child's handwriting. Unfortunately all this leads to the greatest crime and the destroyer of innocence - paedophilia. Firstly implied in a vision and then later it becomes reality when, as an adult, she is raped by the same man from her vision; her dress, mental state and the way she cowers makes her a child again.

Oddly, at the end of the film she sprays herself with perfume and dresses like her mother. She replaces her mother and is the parent to her hallucination of the child Sylvia. She becomes her own mother.

Anyway, I'll leave it there before I give too much away.

The creepiness of the supporting characters is perfectly handled. They're not spooky in that John Carradine "You're all doomed" way, it's more subtle with little gestures, glances and demeanour that makes you shiver.

Beautifully shot by cinematographer Mario Masini with bright, hyper-real colours (I've no idea what they shot on but it's got that lovely Eastman or Technicolor feel). I wouldn't be surprised if Argento watched this film before making Suspiria as it's a real kaleidoscope of colours.

The score is suitably menacing with discordant violins and some well judged silences. There is some nice use of diegetic sound during a scene in a shop.

There is no black gloved killer in The Perfume of the Lady in Black, but it is definitely gialli of the highest order and I loved every minute of it.